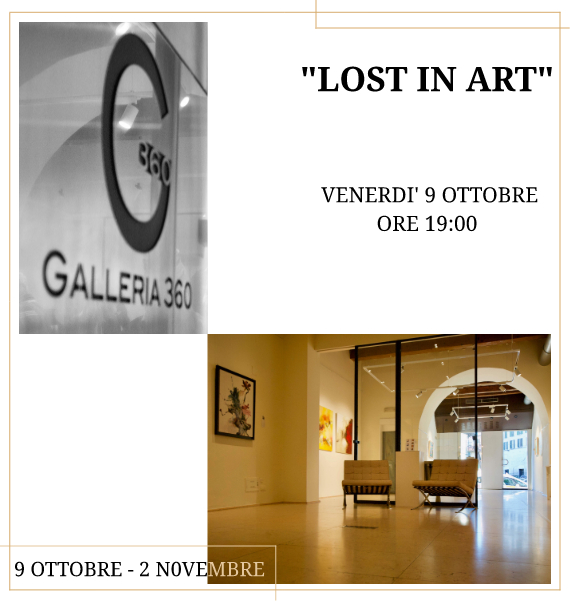 “The dignity of the artist lies in his duty to keep alive the sense of wonder in the world.”
(GK Chesterton)

Galleria360 is pleased to announce the inaugural event of a new artistic exhibition entitled “Lost in Art”
that to be held on Friday 9th of October 2020 at 7.00 pm live streaming on Instagram

Art, in its ability to make visible what is not visible, to transcribe those invisible motions that govern the soul and the world, constitutes a sort of magical practice with a strong fascination power.
Also the origins of the artistic practice are linked to a ritual context, first magical and then religious. According to a legend told by Pliny the Elder in the XXXV Book of his Naturalis Historia, a girl from Corinth, daughter of the potter Butade Sicionio, was madly in love with a young boy. Having to leave, while he slept, the girl saw the shadow of the young man projected on the wall and outlined his profile in the light of a lantern, to keep the memory of him when he was far away. On the basis of those lines, the father shaped the clay reproducing the likeness of the young man. Thus, painting and sculpture were born, fruit of love, that of a woman for a man and a father for his daughter.
The anecdote shows us the true “magic” of art: that of materializing the most ephemeral dimensions of the human intellect as a memory, emotions and ideals. It allows us to look beyond the mere materiality of our daily life. Art therefore will not have real thaumaturgical powers but through its enchantment / spell, it allows us to overcome the ordinary by opening us to new horizons of meaning and hope.